Portland, Oregon has been in the news lately because of demonstrations in a 3-block radius from the Justice Center downtown. I thought now would be a good time to highlight what makes Portland great.

1) The variety of bar and restaurant options.

While Coronavirus has killed many of the burgeoning establishments (Pok Pok, Arleta Library Bakery & Cafe, Blue Hour, Tanker Bar, to name a few), others are still surviving on thin budgets while navigating the nightmare. Places like Advice Booth, Rose & Thistle, Ovation Bar (OK it’s actually in Milwaukie), Jolly Roger, Mad Hanna, Satellite Room, and Tabor Tavern are still open for business and somehow maintaining their sanity. Some restaurants are doing take-out and delivery. Some of my favorites are:

2) Neighborhood shows of spirit in all the little ways

Portland Parks and Recreation manages five golf courses throughout the city. These have been a way to get outside while maintaining physical distance. As you may know, I love to golf. They offer junior golf programs so the city’s youth can learn a new sport. Women-only groups are also offered. Colwood, Eastmoreland, Heron Lake, RedTail, and Rose City dot the map across town with beautiful green spaces to get that hole in one. They even offer a 3-year scholarship program for students entering their freshman year of high school. Hello, awesome summer job!

I do not see the dog-friendliness in other towns like I see in Portland. Many outdoor restaurants offer water bowls for furry friends and even let them be with their owners. Tin Shed offers half-off dog meals when dogs wear their bandanas. The purchase is 100% donated Puplandia Dog Rescue. For the cat people, Purrington’s Cat Lounge is a place where you can grab a cup of coffee and chill with the cool cats who are up for adoption.

6) Being within driving distance to:

These are just some of my reasons. What else would you add to the list? Or if you don’t live here, send me a message if you’d like to find out in person.

America: The Great Expanse. I moved around a lot as a kid, so it is no surprise my mom traveled to Williamsburg, Virginia from Billings, Montana to explore history through the lens of cooking. I was reminded of her travels (and subsequent published article) this Fourth of July holiday weekend. Independence Day celebrations have traditionally been a time for friends and family to gather at cookouts (or “barbecues”, depending on where you’re from) and an opportunity to share in traditions through cooking. I unearthed this article published in 1984 in The Billings Gazette when my mom, Judie Besso, taught cooking classes. The following piece highlights her travels to Williamsburg, Virginia, to experience early colonial history, specifically through food. I hope you enjoy the glimpse into culinary history below. Do you think you’ll try these recipes? What are some traditional dishes your family enjoys? Drop me a line! 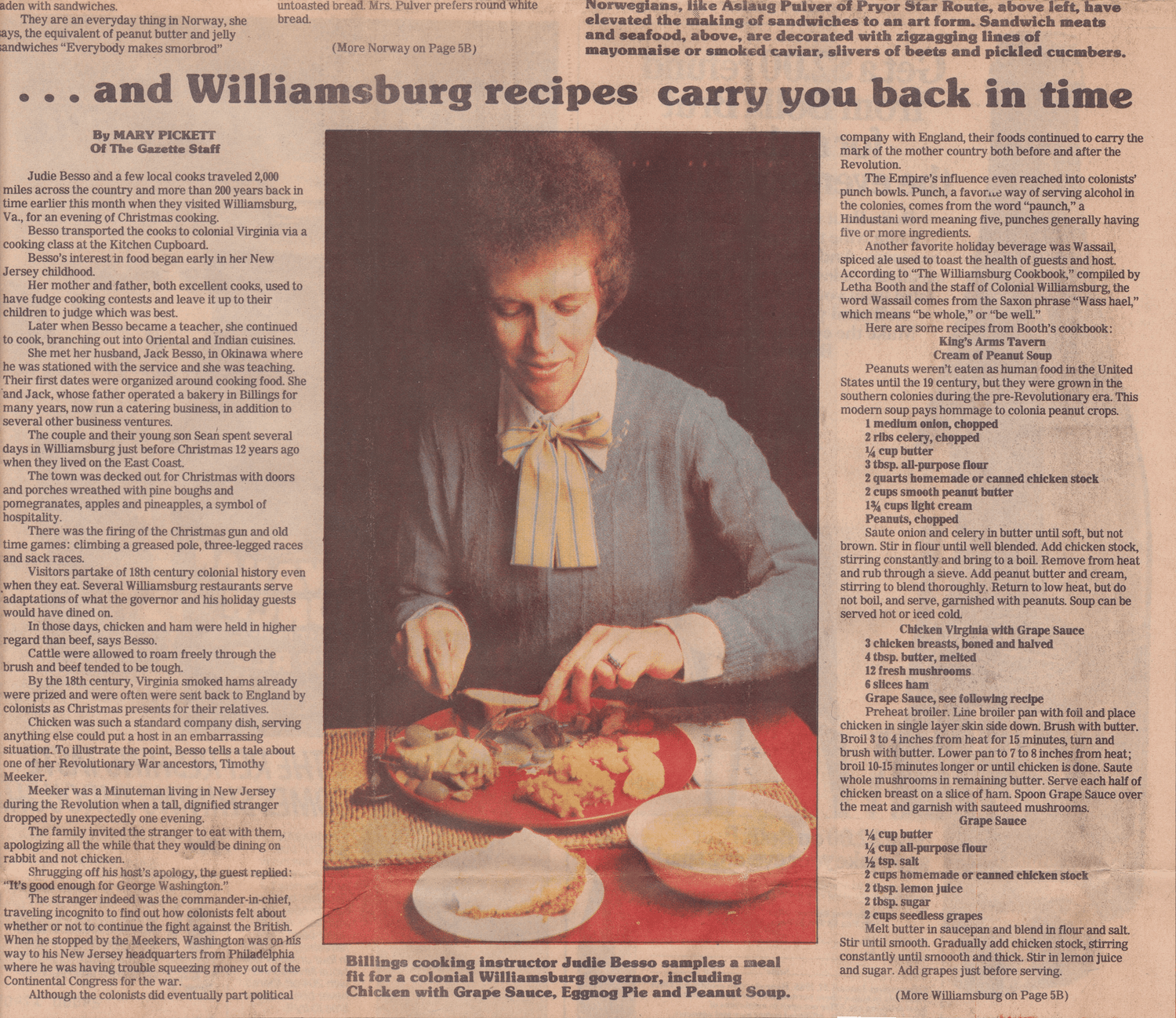 Judie Besso and a few local cooks traveled 2,000 miles across the country and more than 200 years back in time earlier this month when they visited Williamsburg, Va., for an evening of Christmas cooking. Besso transported the cooks to colonial Virginia via a cooking class at the Kitchen Cupboard.

Besso’s interest in food began early in her New Jersey childhood. Her mother and father, both excellent cooks, used to have fudge cooking contests and leave it up to their children to judge which was best. Later when Besso became a teacher, she continued to cook, branching out into Oriental and Indian cuisines. She met her husband, Jack Besso, in Okinawa where he was stationed with the service and she was teaching. Their first dates were organized around cooking food. She and Jack, whose father operated a bakery in Billings for many years, now run a catering business, in addition to several other business ventures.

The couple and their young son Sean spent several days in Williamsburg just before Christmas 12 years ago when they lived on the East Coast. The town was decked out for Christmas with doors and porches wreathed with pine boughs and pomegranates, apples and pineapples, a symbol of hospitality. There was the firing of the Christmas gun and old time games: climbing a greased pole, three-legged races and sack races. Visitors partake of 18th century colonial history even when they eat. Several Williamsburg restaurants serve adaptations of what the governor and his holiday guests would have dined on. In those days, chicken and ham were held in higher regard than beef, says Besso. Cattle were allowed to roam freely through the brush and beef tended to be tough. By the 18th century, Virginia smoked hams already were prized and were often were sent back to England by colonists as Christmas presents for their relatives. Chicken was such a standard company dish, serving anything else could put a host in an embarrassing situation.

To illustrate the point, Besso tells a tale about one of her Revolutionary War ancestors, Timothy Meeker. Meeker was a Minuteman living in New Jersey during the Revolution when a tall, dignified stranger dropped by unexpectedly one evening. The family invited the stranger to eat with them, apologizing all the while that they would be dining on rabbit and not chicken. Shrugging off his host’s apology, the guest replied: “It’s good enough for George Washington.” The stranger indeed was the commander-in-chief, traveling incognito to find out how colonists felt about whether or not to continue the fight against the British. When he stopped by the Meekers, Washington was on his way to his New Jersey headquarters from Philadelphia where he was having trouble squeezing money out of the Continental Congress for the war. Although the colonists did eventually part political company with England, their foods continued to carry the mark of the mother country both before and after the Revolution. The Empire’s influence even reached into colonists’ punch bowls.

Punch, a favorite way of serving alcohol in the colonies, comes from the word “paunch,” a Hindustani word meaning five, punches generally having five or more ingredients.

Another favorite holiday beverage was Wassail, spiced ale used to toast the health of guests and host. According to “The Williamsburg Cookbook,” compiled by Letha Booth and the staff of Colonial Williamsburg, the word Wassail comes from the Saxon phrase “Wass hael,” which means “be whole,” or “be well”.

Here are some recipes from Booth’s cookbook:

Peanuts weren’t eaten as human food in the United States until the 19th century, but they were grown in the southern colonies during the pre-Revolutionary era. This modern soup pays homage to colonial peanut crops.

Sauté onion and celery in butter until soft, but not brown. Stir in flour until well blended. Add chicken stock, stirring constantly and bring to a boil Remove from heat and rub through a sieve. Add peanut butter and cream, stirring to blend thoroughly. Return to low heat, but do not boil, and serve, garnished with peanuts. Soup can be served hot or iced cold.

Preheat broiler. Line broiler pan with foil and place chicken in single layer skin side down. Brush with butter. Broil 3 to 4 inches from heat for 15 minutes, turn and brush with butter. Lower pan to 7 to 8 inches from heat; broil 10-15 minutes longer or until chicken is done. Sauté whole mushrooms in remaining butter. Serve each half of chicken breast on a slice of ham. Spoon Grape Sauce over the meat and garnish with sautéed mushrooms.

Sean Besso first became an Oregon resident in 1985 and a Portland homeowner in 1996. His father’s work in food service management lead his family to vastly different areas of the country: Oahu, North Carolina, Montana, and Tillamook, Oregon. His first job was in the family restaurant at the Crust and Kettle in Montana. When the recession hit in 1985, the family moved to Tillamook, where his father opened the first Edward Jones office. Sean moved to Eugene after high school to attend the University of Oregon, where he majored in Sociology and Political Science, with a minor in Japanese studies. University of Oregon is also a significant stop in Sean’s life, where he met his wife, now a Portland school teacher.

Other work experience includes: Enterprise Rent-A-Car in San Francisco, West Coast Event Productions as an event manager, American Show Management producing IT trade shows in California and the southwest, and Contractor Project Manager for Phoenix Redevelopment. This job was his first exposure to real estate. He learned valuable lessons about buying homes, fixing them up, reselling them, and contractor dos and don’ts.

A conversation with his father-in-law inspired Sean to become a real estate broker. He counted working for himself as a plus. And after all, his mother had been a broker in Billings, so he was familiar with the work ethics of unconventional hours, navigating a competitive climate, and importance of client care. In the meantime, he attended classes at Portland State University in the Urban and Regional Planning School. Bartending during the day, he took classes at night to obtain his real estate license.

Once he obtained his broker’s license, he sought out a company that was not of the traditional “hard sell” school of sales. ABC is more about “Always Be Caring” than “Always Be Closing” for Sean. He counts having the experience with the development group and buying his first home as pivotal learning points. He knows from personal experience how important it is to have a broker who is your advocate, is knowledgeable, and is not going to be that slimy, unqualified salesperson pushing a quota agenda.

His former landlord, who had recently gotten his real estate license, sold them their first house. It was his landlord’s first and last real estate transaction. A few years after the sale, Sean discovered the roof had multiple layers, where only two layers are allowed. In fact, the fascia popped off when the roof was replaced, because the weight of all the roofing layers had been lifted. They experienced a sewer line and furnace failure within the first two years of ownership. These were not just nightmares, but real circumstances they could have planned for or even negotiated, had they had competent representation. Sean shares these experiences to help clients understand the importance of advocacy and guide them through the inspection process.

As the market changes, it is crucial to stay on top of rules and regulations, while keeping current with continuing education. See the blog post about 2019 real estate contract changes. Thirty-three credits of continuing education are required every two years for brokers. From 2017-2018, Sean achieved 86 credits, including obtaining his Principal Broker’s License. Other certifications include:

Sean’s favorite books and movies are:

The story of Jeremiah Johnson is especially poignant for Sean. Ask about how his grandfather knew him in “The Old West” of Montana.

The best advice he’s received? Do unto others as you would have them do unto you.

Next travel destination? Italy or Japan. He’d love to learn more about the Italian side of his family. He is drawn to Japan to embark upon a Shinto pilgrimage. He has always felt an inexplicably close connection with Japanese culture.